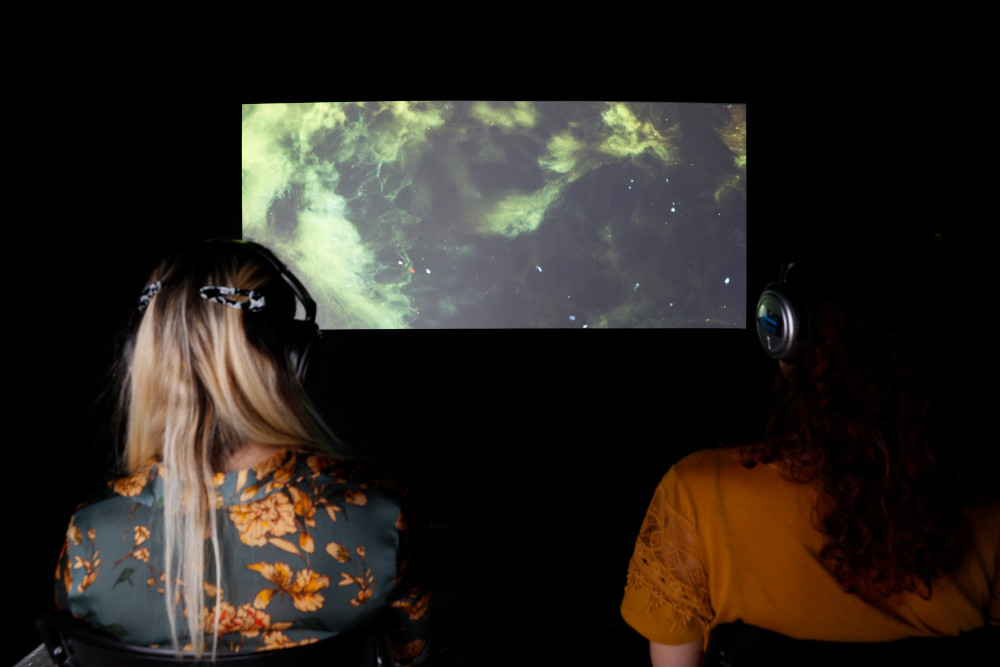 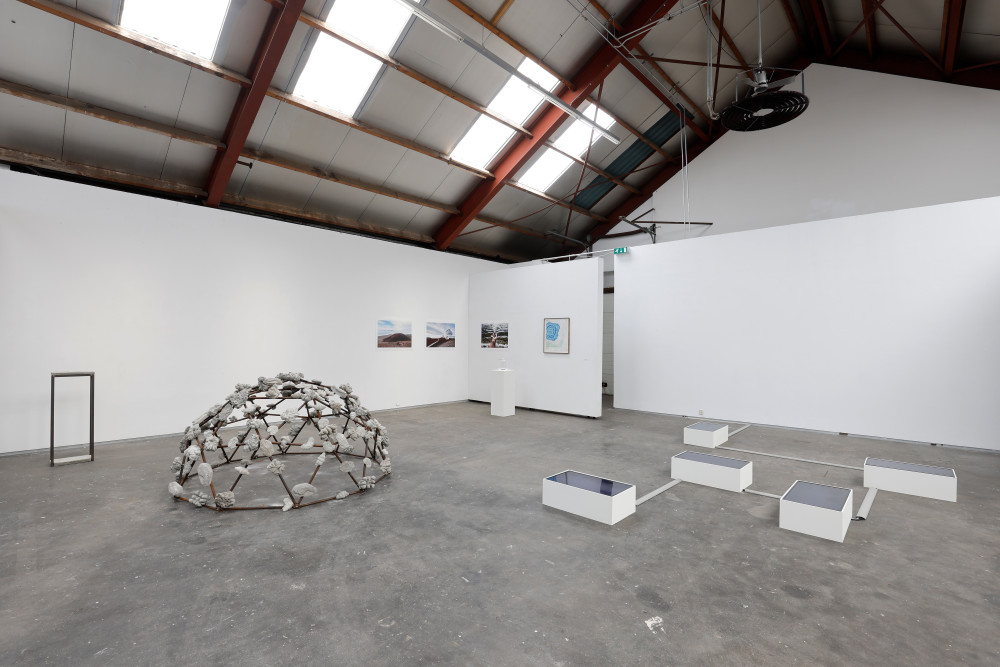 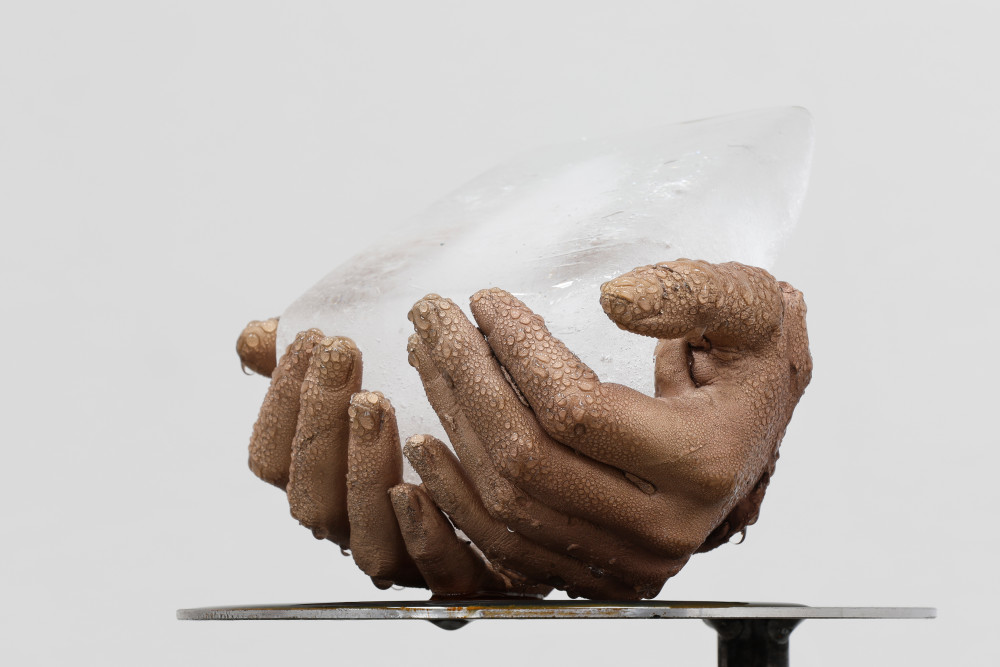 Marlies Augustijn is a curator, currently based in Rotterdam. We speak about her most recent curatorial project Still Waters Run Deep, a group exhibition at Amsterdam's NDSM Warf.

Please tell us a bit about yourself and your work

My name is Marlies Augustijn and I’m a curator and writer based in Rotterdam. My core interest in curating lies with interdisciplinary projects. I seek to build bridges between the art world and other worlds, such as those of policy-making or science. This stems from the conviction that today's complex societal problems can only be solved if various disciplines mutually inspire each other and exchange knowledge. I studied Curating Contemporary Art at the Royal College of Art in London, after which I worked in the London art world for a few years. I became familiar with the field of performance art through my work for the RIA (Roberts Institute of Arts); Block Universe, an international performance art festival and commissioning body based in London; and later through Extra Extra, a Rotterdam-based multidisciplinary platform exploring the sensuality of contemporary urban life. In the last few years, my practice has become increasingly engaged with ecology and climate, as I strongly believe the climate crisis is one of the most – if not the most – urgent issues that currently threatens our planet.

What led you to curate an exhibition about water?

There are a few things that collided and that inspired me to curate the exhibition Still Waters Run Deep. The project stems on the one hand from the personal connection I have always felt with water – I have always had a passion for water sports like swimming, sailing and diving, and loved going to the seaside. Hannah Rowan, one of the artists in the exhibition, graduated in the same year as me from the Royal College of Art. I actually saw her work in the graduation exhibition which very much inspired me to look into the topic of water further. As a few months/years went by, I came across more and more artists that were inspired by the qualities of water, which resulted in the selection of wonderful artists that contributed to the exhibition: Phoebe Boswell, Deep Time Agency (Miriam Sentler & Wouter Osterholt), Patrick Hough, Esther Kokmeijer, Kasia Molga, and Hannah Rowan. In this period I also grew increasingly worried about how water is currently being managed and treated. Industrial processes, human alterations to and extraction from the landscape and human-induced climate change caused pollution, a decline in biodiversity, and water scarcity or floods. Water crises are in the news almost daily now, yet water is so vital to all life on planet Earth and we should take care of it better. I was keen to contribute to a more sustainable interaction with water, which I felt I could explore elaborately through this project.

What did you discover about water through your research and from the artists in Still Waters Run Deep?

The biggest discovery I had about water stems from the concept of hydrofeminism. This is the idea that water is what inextricably interconnects natural, cultural and human bodies, moving through those by flowing, freezing, evaporating and seeping. I had always taken the fact that humans need water to survive somewhat for granted. Working on Still Waters Run Deep deeply made me realise just how vital the element of water is to humans, and to all life on planet Earth. Water appears in nature as oceans, rivers, lakes and seas, groundwater, glaciers and clouds; it is captured in political and cultural phenomena, such as wastewater systems, aquariums and swimming pools; and it flows through human bodies to hydrate and fuel cells, organs and tissue. Realising that water is truly everywhere, and truly needed everywhere, has changed my outlook on how we should interact with and manage water. I think that Kasia Molga, one of the artists in the exhibition, gives a beautifully poetic example of what this could look like. In her exhibited works, she has explored whether tears, sweat and urine could nurture new, tiny marine ecosystems and contribute towards the wellbeing of aquatic organisms.

I’ve also realised the importance of granting some form of voice or rights to something that does not have a (speaking) ‘voice’ of its own. Many of the artists in the exhibition and participants in the public programme inspired me to think about ways that we can listen to water, and enhance our connection with nature, water in particular. I was very interested to learn how we can nowadays learn so much from indigenous communities, that have been living in harmony with nature for centuries. Esther Kokmeijer, one of the artists in the exhibition, has for example been inspired by the century-old wave navigation technique stemming from the Marshall Islands, where navigators used to remotely sense land by detecting how islands disrupt swells.

What kinds of enquiries did the site of Nieuw Dakota, in NDSM-wharf bring to the project?

Still Waters Run Deep was presented at Nieuw Dakota for the location’s strong connection to water on national and local level. Clearly, water and water management have always played a significant role in the Netherlands as the country is so far below sea-level. Amsterdam in particular was a suitable location for this project as its many kilometres of canals still make it one of the most water-rich cities in the world. Most canals were historically built to stimulate international trade. Amsterdam today is home to the second largest port in the Netherlands, and is one of Western Europe’s largest five sea ports. Harbours, and hence water, globally remain important tools for commercial trade and economic profit. Amsterdam therefore embodies the friction between the economic appropriation of water and the need to care for it more. The NDSM-wharf is a former ship wharf and therefore closely connected to the history of Amsterdam’s harbour. (Trade) ships can be particularly polluting to the water, and therefore the location of Nieuw Dakota was very relevant to the critical questions that Still Waters Run Deep was trying to address.

During the workshop ‘Making Waves – Redefine’ that took place as part of the public programme, we specifically explored the NDSM-area. Using the NDSM-wharf as a case study, participants were invited to use design thinking and speculative design methodologies to unlock water-related challenges within the community. We interviewed people on the street to understand the current local relationship with water and its effects. A major realisation that arose from this was that most people mainly think of water as a product to use (for showering, toilet, drinking, washing machine etc.). Many people we spoke to tried to be conscious about their water usage (for example take short showers or use bio-degradable products), yet did not seem to be consciously aware of the larger and interconnected water-related issues at stake worldwide. It led us to envision a 2025 human-water relationship on the wharf based on mutual care (between humans and water).

What are you feeling inspired by right now?

Through Taneha Bacchin, one of the speakers in the panel discussions as part of the public programme, I got to know the Delta Urbanism and Water4Change research programmes. These programmes address water (flood protection, soil and water management) in the context of urban design and spatial planning. The Water4Change project specifically addresses these issues in secondary cities in India. It truly inspires me to see how these type of programmes really practically engage with challenges of water management and giving water a more significant place in the context of land-based and concrete spaces that cities are. I was therefore also drawn to the work of Deep Time Agency – that was also part of the exhibition – as their project not only presented an artwork but an object that could afterwards play a role in the ecological redevelopment of the damaged landscape of the ENCI lake.

Something else I have recently felt inspired by is not so much water-related. Last weekend I visited the Lubaina Himid exhibition in London, consisting of paintings and installations unfolding as a sequence of ‘theatre’ scenes designed to place visitors centre-stage and backstage. Each room was introduced by one or two questions posed to the audience, such as ‘we live in clothes, we live in buildings – do they fit us?’, ‘what does love sound like?’, and ‘how do you distinguish safety from danger?’. The way the exhibition told its story was very well-done and I loved how the questions involved the audience and helped to engage with the artworks. What I liked most were the many soundworks/scapes that made the visit an almost meditative experience. One of the soundscapes actually consisted of sounds of the sea and a creaking wooden ship, so perhaps this brings us back to water in the end.

Finally, 'What is a Material' to you?

This is a very interesting question, that I have never considered so consciously. I’ll try to answer this in the best way I can. I think when I was young, a material was mostly something I was creative with – like paint to make a painting. Growing older, it has gotten more of a practical connotation – a material is something I need to fulfil a task, such as a piece of wood to lay a floor. However, now thinking about it more deeply, I think material can be anything that is applied to convey a message; this can be anything tangible like wood or stone, but also ephemeral like sound, information or ideas (e.g. the ‘materials’ to create a book), or indeed water. It does not have to be a physical object that one can hold in their hands. A material is therefore not neutral, it is something that anyone can apply to tell their story, such as in Still Waters Run Deep, some of the artists took to water to tell stories about our connection with nature.